You Are Here: Home / News / Latest News / Solar Powered Bins In The ACT 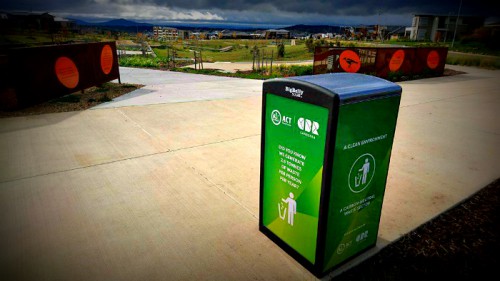 Canberra has announced the start of a twelve month trial of Bigbelly solar powered bins in three locations around the ACT. The aim is reduce unnecessary bin collections therefore reducing fuel and carbon emissions of collections as well as preventing overflow, litter and increasing efficiency.

The Minister for Transport and Municipal Services, Meegan Fitzharris, made the announcement saying that the bins will be located in Campbell, Kingston Foreshore and Link Park at Wright. Each bin is powered by a 30W polycrystalline solar panel underneath a polycarbonate bubble that powers a sealed, maintenance free 12V battery. Each bin also has a compactor with a force of 570kgs that is powered by a 1/6 horse power DC gear-motor.

“Each bin is solar powered and is fitted with a compactor, significantly increasing their capacity. They can hold up to 600 litres of waste, which is over four times that of our regular bins. The bins are also fitted with a sensor which records real-time data on the volume of rubbish,” said Minister Fitzharris.

In simple terms this means that the bins can be collected once a week instead of three times a week (maybe twice a week if the area has a function on). The bins will also send out emails or SMS’s when the bin is 85% full making planning and efficiency much easier for Municipal Services. This in turn will hopefully resolve any overflow and littering in the areas as well.

Bigbelly’s solar powered bins have been widely used around the USA with many cities saving huge money by installing them. Melbourne already uses 50 smart bins and Sydney’s Inner West is also using 6 of them. The first of solar powered bins in Australia were trialled by the Mosman Council in 2010. Since then the company has gone from strength to strength and there is no reason why we shouldn’t see these rolled out nationwide in the near future.